Smart glasses have been positioned as the window into the future. They’ve been a promising technology for many years now. With the recent developments, it’s likely that by the end of this decade they very well may become a tech accessory as common as the smartwatch is today.

Artists, technicians, gamers, business people, and many more will be able to derive a variety of fantastic benefits from the augmented reality (AR) features of smart glasses. And as companies like Amazon®, Google®, Microsoft®, and Facebook® pour more investment into their own smart glasses, the potential for innovation and exciting developments in AR technology continues to grow.

What are Smart Glasses?

Smart glasses offer a way to bring the functionality, imaging, and wireless connectivity found in smartphones and computers into eyewear. They may appear like normal glasses, but these smart wearables enable users to experience augmented reality visuals and connect with the virtual world around them.

Instead of reaching for their smartphones, users can use smart glasses to go shopping, navigate their way through a city, talk to friends, and make payments.

The Journey of Smart Glasses So Far

The journey of smart glasses so far has hardly been smooth sailing. Since they first emerged on the market, practical applications have been limited by their early-stage AR functionality and clunky designs.

Most notably, Google started selling its Google Glass smart glasses in 2013. Time Magazine recognized it as one of the “Best Inventions of the Year,” but by 2015, its limited viability as a retail product caused Google to stop production. Since then, Google has focused its efforts on creating smart glasses for the workplace and, in 2019, released Google Glass Enterprise Edition 2.

While Google paved the way, other tech players soon entered the market and started refining their own smart glasses technologies. Companies like Vuzix®, Microsoft, and Toshiba all began to create their own versions of smart glasses. Some like Microsoft’s HoloLens veered more towards mixed reality smart glasses for the workplace. Others, like Bose®, concentrated on Audio Sunglasses for personal use.

The Obstacles Smart Glasses Must Overcome

So, what are the pitfalls of smart glasses in their current form, and where do they have the potential to succeed?

The Potential of Smart Glasses

If companies like Google, Amazon, Facebook, and OPPO® can overcome these common obstacles, the potential for smart glasses is nothing short of mammoth.

Soon smart glasses will be used in educational training, making classes more interactive and enabling students to hone their skills more easily. For example, Vuzix already claims that their Vuzix Blade smart glasses can improve the classroom experience for both students and teachers.

Similarly, smart glasses with AR capabilities will offer a host of gaming applications. AR games like Pokemon Go®, Knightfall® and Ink Hunter® will be more fully realized with sleek, wearable technology. Today, most smart glasses lack the computing power to deliver seamless gaming experiences, but it is definitely an area of great potential in the near future.

Recently, the Chinese technology company OPPO revealed OPPO Air Glass, which is capable of real-time translation support for two-way Chinese/English conversations. And with additional Chinese/Japanese and Chinese/Korean translation capabilities slated to be offered soon, the OPPO Air Glass is poised to be an industry-leading game-changer.

Smart glasses that lack AR functionality but focus on more practical features may also have a future in the retail market. For example, some consumer smart glasses like the Facebook-owned Ray-Ban Stories allow users to capture video, take photos, answer calls, and play podcasts with sophisticated cameras and speakers in the frames.

Indeed, positive changes seem to be afoot, with an increasing number of companies investing in their own wearable solutions. With major brands all competing to be the first to offer affordable, stylish, and practical wearable tech, the future of smart glasses seems crystal clear. 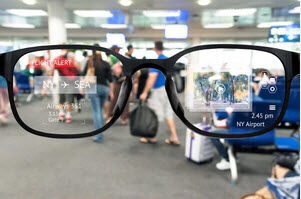