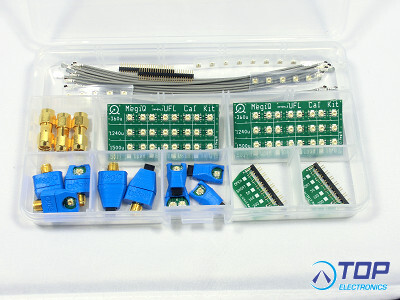 The Balanced Calibration Kit is an interface kit for UFL and balanced VNA measurements. It contains SMA-UFL adapters and several adapters from SMA and UFL to balanced pinheaders.

The UFL connector was introduced by Hirose as the U.FL connector and became very popular for connecting RF signals in consumer electronics. There are several varieties from other manufacturors and are also known as UMC or UMCC connectors.

The UFL calibration kits provides a calibration for UFL footprints for different print stacks (layer thickness). Since it contains a double set of impedances, a full 2-port calibration can be performed in 4 steps instead of 8.

The balanced interface has an Open-Short-Load calibration kit using pin-headers. When the same pin-headers are used for the measurement it will be calibrated at the tip of the pins.